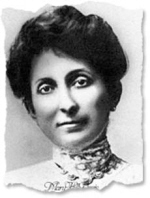 Since 1910, Texas Baptists have collected an offering for missions needs in Texas. In 1935, the Texas Offering was named for Mary Hill Davis, president of WMU of Texas and a tireless supporter of Texas missions. Her leadership in various positions spanned the years from 1898 until her death in 1934.
Born in Greenville, Georgia, Mary Hill came to Texas in 1870 as a small child. Her parents joined First Baptist Church of Dallas when it was only two years old and she later became a member. She married Dr. F.S. Davis when she was twenty and they had one son, Raymond.